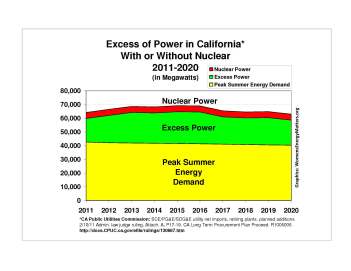 California historically imported significant amounts of electricity, since its wholesale power markets in the region are relatively open and generation from outside the state is often less expensive. Some power plants located in adjacent states are partially owned by California utility companies, and special agreements exist for exporting power to California. For instance, 18% of the Palo Verde Nuclear Power Plant, located in Tonopah, Arizona, is owned by California-based utilities.  See San Onofre nuclear outage contributes to Southern California’s changing generation profile – EIA November 2012.

Use the SMUD Vampire Load Calculator to see savings from items that are turned off but still plugged in.  Note: SDG&E rates are about $0.38 per kWh at the higher end, which is where you will save. SMUD’s calculator maximum is $0.30, so set the calculator kWh to $0.19 and then double the amount for actual savings.  See more energy saving tips below. 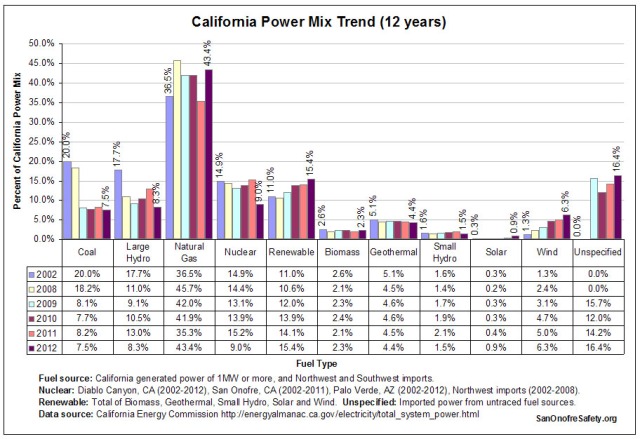 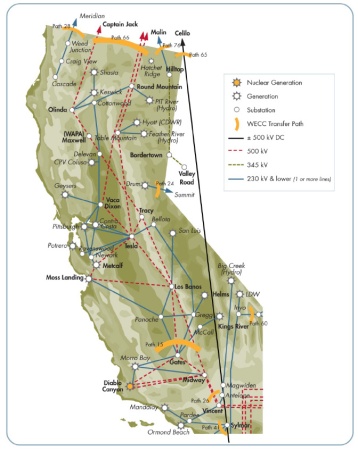 The California 2013-2014 ISO Transmission Plan proves San Onofre and Diablo Canyon are not critical to the electric grid, even though we were told otherwise.

Diablo Canyon‘s 2400 MW of nuclear power is also not needed. The ISO and CEC should be required to develop a renewable and energy efficiency plan for replacement of Diablo Canyon instead of renewing the license for this aging nuclear plant that sits on multiple active earthquake faults and damages millions of sea life every year (due to once-through cooling).

The 2012-2013 Transmission Plan Conclusion, page 169, it states the absence of the Diablo Canyon Power Plant does not have a negative impact on the reliability of the transmission system. The results of this analysis are still valid per Stakeholder Comments, Draft 2015-2016 Study Plan Stakeholder Meeting, February 23, 2015, page 25

In spite of this, the 2015-2016 ISO Transmission Plan assumes Diablo Canyon will not be shut down. It assumes the license will be renewed and the once-through cooling non-compliance will be resolved or ignored. Page 46:

Most of the electric power generated by Diablo is exported to other areas (Kern Area and Central Coast and Los Padres Areas.

Link to 2015-2016 Transmission Plan with Appendices 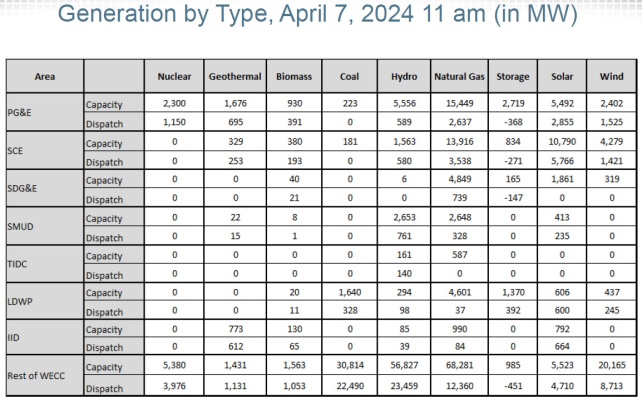 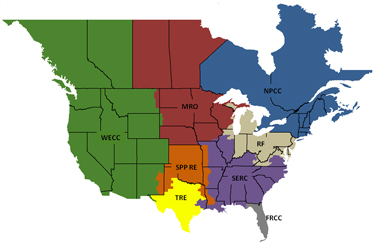 The ISO’s 2013 plan kept us in power for all of 2013 without San Onofre. This included electricity needed for peak load periods in the summer as well as voltage and grid stability. They stated “…the reliability risks to southern Orange and San Diego counties are “marginally more challenging” this summer, but still within planning standards.” See ISO 5/6/2013 News Release. 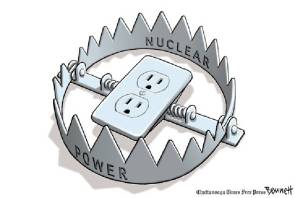 Bill Powers’ 9/21/2012 Quail Brush presentation shows SDG&E has a surplus of energy without San Onofre and does not need to build new gas plants to meet local needs. (Data based on ISO 2012 Summer Loads and Resources Assessment 3/15/2012).

“…and there certainly may be the opportunity to retire certain types of resources like nuclear facilities if the state were to chose to do so,” the FERC chairman said. UT San Diego 06-04-2012

The FERC Summer 2012 Energy Market and Reliability Assessment supports this:

Without the 2.3 GW from this [San Onofre] plant, NERC forecasts that projected reserve margins in California may be close to, but still be above, the regional target of 15.1 percent.

San Onofre’s two reactors have been shut down since January 31, 2011 due to critical equipment problems. There have been no resulting blackouts or brownouts in Southern California.  The electricity grid was able to compensate for this loss.

Rolling blackouts have not occurred with San Onofre offline

Percent of power from San Onofre

There are numerous percentages quoted regarding how much electricity San Onofre provides.  However, the real question is not how much it provides, but how much it needs to provide.  However, for those interested in the percentages, here they are:

Reports of nuclear power costing less than other sources of energy needs to be reevaluated in California, especially at San Onofre.  For example, the cost analysis to replace the San Onofre steam generators assumed high gas prices.  It also excluded the cost of storing tons of toxic radioactive waste for tens of thousands of years as well as numerous other costs. It excluded all energy efficiency alternatives, such as targeted and increased cost incentives to replace residential and commercial  inefficient air conditioners and load balancing in the Edison and SGD&E utility districts.

The average household can cut their electricity bill by 50% through energy efficiency. 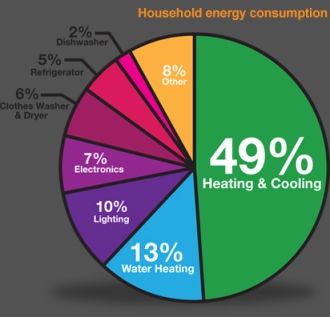 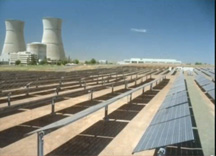 Millions of dollars in renewable energy projects intended to provide power to facilities in California’s national parks and forests have been sitting idle for years because of Southern California Edison.

There’s 24-plus systems in the Southern California Edison area that have been installed in the last three years that we have not been able to negotiate an interconnection agreement on,” said Jack Williams, who retired this month as the National Park Service’s Oakland-based regional facilities manager. “We think we are close at times, but then nothing. We were successful with PG&E, but with Southern California Edison…. They have been a bit more difficult. We’ve raised the flag many times. It’s an issue for all federal agencies.”

The California Solar Initiative (CSI) is the solar rebate program in California for customers of investor-owned utilities – PG&E, Southern California Edison and SDG&E. The CPUC is providing $2.1 billion to businesses, nonprofit organizations, public agencies and homeowners.

Nuclear Power is no solution to Climate Change

A Plan to Power 100 Percent of the Planet with Renewables

A 2009 Stanford University study ranked energy systems according to their impacts on global warming, pollution, water supply, land use, wildlife and other concerns. The very best options were wind, solar, geothermal, tidal and hydroelectric power—all of which are driven by wind, water or sunlight (referred to as WWS).

Nuclear power, coal with carbon capture, and ethanol were all poorer options, as were oil and natural gas. The study also found that battery-electric vehicles and hydrogen fuel-cell vehicles recharged by WWS options would largely eliminate pollution from the transportation sector.

To ensure that our system remains clean, they considered only technologies that have near-zero emissions of greenhouse gases and air pollutants over their entire life cycle, including construction, operation and decommissioning. For example, when burned in vehicles, even the most ecologically acceptable sources of ethanol create air pollution that will cause the same mortality level as when gasoline is burned. Nuclear power results in up to 25 times more carbon emissions than wind energy, when reactor construction and uranium refining and transport are considered.

Mark Z. Jacobson is professor of civil and environmental engineering at Stanford University and director of the Atmosphere/Energy Program there. He develops computer models to study the effects of energy technologies and their emissions on climate and air pollution.

Mark A. Delucchi is a research scientist at the Institute of Transportation Studies at the University of California, Davis. He focuses on energy, environ¬mental and economic analyses of advanced, sustainable transportation fuels, vehicles and systems. 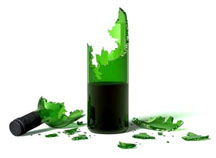 France gets nearly 80% of its electricity from its 58 nuclear reactors. However, such a heavy reliance on nuclear power brings with it many major, unresolved problems most especially that of radioactive waste. As a result, France has a hugely complex and unsolved radioactive waste problems, as well as health, environmental, and financial problems.

Thorium “fuel” has been proposed as an alternative to uranium fuel in nuclear reactors. There are not “thorium reactors,” but rather proposals to use thorium as a “fuel” in different types of reactors, including existing light-water reactors and various fast breeder reactor designs.  Contrary to the claims made or implied by thorium proponents, however, thorium doesn’t solve the proliferation, waste, safety, or cost problems of nuclear power, and it still faces major technical hurdles for commercialization.  See Fact Sheet by the Institute for Energy and Environmental Research and Physicians for Social Responsibility.

The new AP1000 nuclear reactor has serious design flaws. On a 4 to 1 vote, the NRC Commissioners approved building this in Georgia, even though numerous problems exist with the design and lessons learned from Fukushima have not been implemented.  Vogtle nuclear plant now under construction in eastern Georgia.

Small modular reactors present many of the same problems as other reactors, as well as introducing additional problems as noted in Prognostics Health Management for Advanced Small Modular Reactor Passive Components, October 7, 2013, Ryan M. Meyer, et.al.  Harsher operating environments and up to 30 years between refueling make it a challenge to adequately inspect for degradation. Technology needed is not available or not adequate.

Several advanced reactor concepts are intended to operate for extended periods between outages. For LWRs, outages are scheduled every 18–24 months for refueling but several advanced reactor concepts are intended to operate with much longer periods between refueling. The Toshiba 4S concept, for instance, is designed to operate up to 30 years without refueling (Tsuboi, Arie, Ueda, Grenci, & Yacout, 2012). The SSTAR is another advanced reactor concept with targeted operation periods of 15 to 30 years between refueling activities (Smith, Halsey, Brown, Sienicki, Moisseytsev, & Wade, 2008). Several other reactor concepts such as the liquid fuel MSRs and pebble bed-type VHTRs may have the capability to refuel while operating. Thus, it will be important that PHM systems for AdvSMRs are capable of utilizing data obtained from on-line measurements as well as data collected during outages…

3.1. Sensors and Instrumentation for Condition Assessment of Passive Components

Because opportunities to perform inspections and maintenance of passive components when the plant is offline will be limited in many designs, there is a need to monitor risk-significant passive components during plant operation for degradation. In addition, there is a need to monitor the stressors (time at temperature, fluence, mechanical loads, etc.) that are expected to contribute to degradation of these components. Requirements for sensors and instrumentation (whether for on-line or off-line condition assessment or for stressor monitoring) include: • Ability to tolerate the harsh operating conditions in AdvSMRs. • High sensitivity, to ensure that reliable measurements from earlier stages of degradation are possible. • Capability to quantify the amount of degradation from the measurements…

PHM for passive components in AdvSMRs can play a key role in facilitating the deployment of AdvSMRs by minimizing controllable day-to-day costs associated with plant O&M. Although potential concepts and designs for AdvSMRs vary significantly, there are some general features that can help define the requirements of a PHM system for passive components. Degradation may be sampled in AdvSMRs through online and offline measurements. A PHM system is likely to be most effective if prognostics algorithms can use both types of measurements. A basic illustration is provided of a prognostics method based on the PF technique for predicting passive component failure due to thermal creep degradation. The illustration simulates sampling of creep degradation with offline NDE measurements. The illustration only represents the start of prognostic algorithm development as additional functionality to address many the requirements in Section 3 will need to be demonstrated. The approach is to alternately add functionality and demonstrate that added functionality with accelerated aging studies.