There is limited monitoring of radiation in the air, milk and water.  Public access to the data is limited.  In California, official near real time radiation levels close to San Onofre and Diablo Canyon are not available to the public.  See California Radiation Monitors map, and EPA RADNET website and location map, and EPA radionuclide water testing requirements.

Safecast operates an international volunteer public access real-time radiation monitoring. The levels are aggregated, so peak levels may not display. Individuals can purchase small monitors to help add to the public information available. Also, Solarcast stationary solar powered cellular monitors are currently in beta testing. Radiation monitors are more complicated and fragile than cell phones, so training is needed before use. Monitor must be turned off before charging. Safecast has enabled people to monitor their own homes and environments, and to free themselves of dependence on government and other institutions for this kind of essential information.  However, much more data is needed.  Safecast radiation maps can be zoomed in or out internationally. Turning on the satellite map option will more clearly show the location of the radiation measurement. 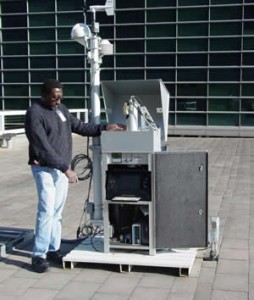 The U.S. Environmental Protection Agency (EPA) provides near real time radiation monitoring information to the public on their RADNET website. See also a California display of this data.

The EPA no longer monitors radiation in milk.  They monitor air, precipitation and drinking water.  However, monitoring is inadequate.

Broken RadNet monitors and late filter changes impaired this critical infrastructure asset. On March 11, 2011, at the time of the Japan nuclear incident, 25 of the 124 installed RadNet monitors, or 20 percent, were out of service for an average of 130 days.

Until EPA improves contractor oversight, the Agency’s ability to use RadNet data to protect human health and the environment, and meet requirements established in the National Response Framework for Nuclear Radiological Incidents, is potentially impaired.

The California Department of Public Health (CDPH) Radiologic Health Branch (RHB) previously provided quarterly on-line radiation reports from San Clemente and eight other locations around the state, but that appears to no longer be the case.  Pursuant to California Health and Safety Code section 114755, RHB conducts a small amount of routine monitoring of radioactive materials in the environment, including radioactive materials in media such as air, milk, food, and water.   The results of this monitoring for the years 2011 through 2016 are available by request at environmental.radiation@cdph.ca.gov.

Location of California managed radiation monitors. There is no on-line monitoring capability with these old stationary monitors. Occasional air sampling occurs at the following locations within California.  Filters must be removed at the site and sent to the  California radiation lab in Northern California (Richmond).

The State Water Resources Control Board Division of Drinking Water regulates public drinking water systems, but it doesn’t regulate bottled water or vended water — these are regulated as food by CDPH’s Food and Drug Branch.

Southern California Edison has monitoring stations at San Onofre, but they will only share annual reports with the public.

The Food and Drug Administration is responsible for testing food for radiation and for monitoring imports. Very limited data is being shared and much of it is outdated as you will see from these FDA links.

Dr. Hunter said if there was a specific incident, such as a radioactive release from a nuclear reactor, that could trigger checking for radiation. I mentioned the on-going triple meltdown at Fukushima.  He said he was not aware of any policy or any action taken by the FSIS from that incident. He referred me to the FDA, but was not personally aware of standards for radiation levels in meat and poultry or if FDA set those standards. He knew they set standards for milk and admitted if radiation was found it milk it would be in the cows (which they inspect). He said the FDA had not informed them of radiation in milk.

The Nuclear Regulatory Commission (NRC) allows all nuclear plants to release various types of radiation every year. Nuclear reactors cannot operate without doing this.  The NRC allows levels “as low as reasonably achievable” — not what is safe.

Nevada has a Community Environmental Monitoring Program (CEMP). It is a network of 29 monitoring stations located in communities surrounding and downwind of the Nevada National Security Site (NNSS), formerly the Nevada Test Site (NTS), that monitor the airborne environment for manmade radioactivity that could result from NNSS activities. The CEMP is a joint effort between the Department of Energy’s National Nuclear Security Administration Nevada Site Office (NNSA/NSO), and the Desert Research Institute (DRI) of the Nevada System of Higher Education. The network stations, located in Nevada, Utah, and California are comprised of instruments that collect a variety of environmental radiological and meteorological data.

To manage the stations, DRI employs local citizens, many of them high school science teachers, whose routine tasks include minor maintenance of the equipment, collecting air filters and routing them to DRI for analysis. These Community Environmental Monitors (CEMs) are also available to discuss the monitoring results with the public, and are available to speak to community and school groups. Program funding and equipment are provided by NNSA/NSO. DRI manages the program, provides technical direction, employs and trains CEMs, conducts public outreach activities and collects data to be analyzed by an independent laboratory.

HANDOUT: Please share this one page fact sheet on California Radiation Monitoring with your elected officials and ask their support to improve radiation monitoring in California.

The County of San Diego Radiological Health Program (Community Health Division) participates in emergency preparedness planning for the San Onofre Nuclear Generating Station & the Off-site Dose Assessment Center. And San Diego County is one of the few local agencies designated by the Department of Health Services to conduct radiation inspection.

San Diego State University purchased a RADNET monitoring station. However, they are not sharing data with the public, according to this HI-Q Environmental Products Company July 25, 2012 press release. For more information about the RADNET equipment, see Page 28 of HI-Q Catalog.

San Onofre Unit 3 had a radiation leak on 01/31/2012.  NRC Management Directive 8.3 (2/16/2012) states the leak amount is an “estimate” (page 6 of Decision Document form). This brings into question the accuracy of the data we are receiving from San Onofre.

Radiation Types and Risks: For information on types of radiation and health risks, click here.

What if the Fukushima nuclear radiation fallout happened in the U.S.? These radioactive plumes from severe nuclear accidents were calculated by NRDC based on the actual weather patterns of March 11-12, 2011. The result on any given day will vary according to the type of reactor accident and on the prevailing weather patterns at the time. These plumes artificially extend only to 50 feet. Winds can carry them further.  See NRDC interactive U.S. map.

What is RadNet Compliant?

RadNet compliant radiation monitors, independent of the manufacturer or type, may all be connected to the same network. The monitors may be linked in real time directly to one or more PC workstations. The RadNet communication protocol is based on the Universal Datagram Protocol / Internet Protocol ( UDP/IP) which is common to all systems using the well known TCP/IP protocols for data transmission. The network can handle literally hundreds of monitors with no measurable network load. More…

Uranium above MCL in 276 public wells 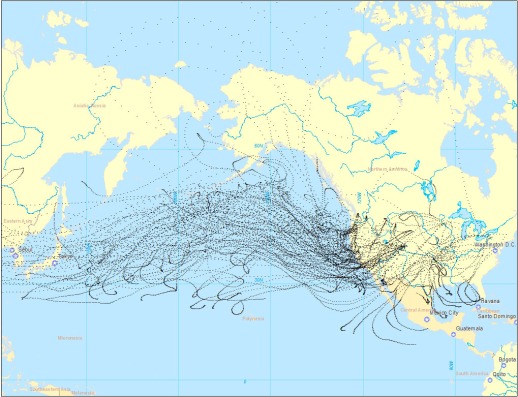 Atmospheric back trajectories from sites where radioactive fallout was measured in NADP precipitation samples.

The U.S. Geological Survey (USGS) in collaboration with the National Atmospheric Deposition Program (NADP) monitored North American precipitation samples for the presence of nuclear fallout after the 3/11/2011 Japan Fukushima Daiichi nuclear disaster. Specifically, excess precipitation and filtrate (insolubles suspended in precipitation) from National Trends Network sites and selected Mercury Deposition Network sites were analyzed for the presence of radiological fallout for samples collected during the 3/8/2011 to 4/5/2011 sampling period. NADP samples were provided to the USGS’s TRIGA Nuclear Facility in Denver Colorado, where the radiological determinations were made.

Detections and measurable fallout from wet deposition was observed primarily at NADP sites located along the West Coast of the US, the central Rocky Mountain region and northern Great Plains, the central and upper Mississippi River Valley and eastern mountainous regions ranging from Virginia northward through Vermont. Deposition was also observed at NADP sites in Alaska (see figure).

In general plutonium concentrations are higher in organisms feeding on sediment or on surfaces than in those drawing largely on the water itself. There is some evidence that plutonium concentrations are higher in organisms of higher trophic [food chain] levels.  A considerable series of North Atlantic Ocean organisms have been analyzed, by radiochemistry and alpha spectrometry, for fallout plutonium 239-240 and 238. Organisms from the near-shore environment have been selected to show the effects, on plutonium uptake, of variations in feeding habits, association with sediment or with absorptive surfaces, and of trophic level.  Plutonium in North Atlantic Ocean Organisms; Ecological Relationships, Victor E. Noshkin, Vaughan T. Bowen, Kai M . Wong, John C . Burke, Woods Hole Oceanographic Institution, May 10-12, 1971 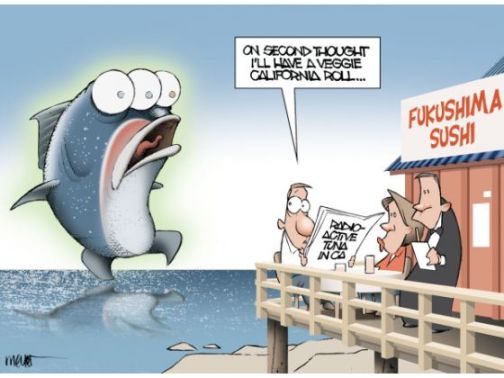