PG&E plans to shut down Diablo Canyon nuclear reactors by 2025 and replace power with renewables, efficiency, and storage. Thanks to Friends of the Earth and others for helping to make California nuclear free. They developed a “Plan B” to show how it could be done.

The lethal radioactive nuclear fuel waste will continue to be generated until then, adding to the tons of unsafe waste already stored there in 1/2″ thin walled “Chernobyl” steel canisters that the NRC states can crack and leak from the corrosive salt air – California’s “gift” to future generations.

This is an historic agreement between Pacific Gas and Electric, Friends of the Earth, and other environmental and labor organizations to shut down the Diablo Canyon nuclear reactors by 2024 and 2025 and replace them with greenhouse-gas-free renewable energy, efficiency and energy storage resources.

State Lands Commission approves staff recommendation for new leases to 2014 and 2025 without a CEQA review.

My client, the Alliance for Nuclear Responsibility (“A4NR”), supports the Joint Proposal and commends the other signatories for a truly historic achievement. A4NR declined, however, to endorse the joint letter to the State Lands Commission (“SLC”) and strongly disputes its legal analysis concerning CEQA and the Public Trust Doctrine. We urge the Commission to exercise its discretion to initiate a full EIR process and, using the information gathered, conduct an in depth Public Trust analysis that is consistent with San Francisco Baykeeper, Inc. v. California State Lands Commission (2015) 242 Cal.App.4th 202. 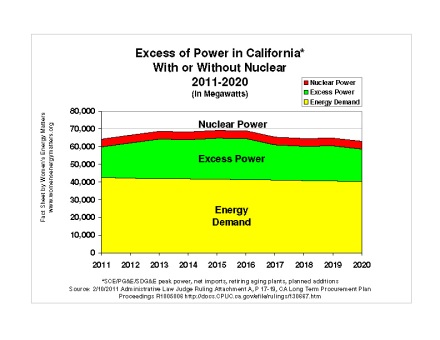 Who has the power to shut Diablo Canyon?

Shutting down nuclear reactors must have the permission of California’s Governor and his reason must be based on other than radiation. That’s the U.S. Nuclear Regulatory Commission’s jurisdiction. However, the NRC discounted their own Diablo Canyon Senior Inspector’s concerns about seismic issues. The NRC was also willing to allow a broken San Onofre reactor to restart.

One of Governor Brown’s concerns with shutting Diablo is green house gases. However, the plant is not needed for energy in California, so is it really worth it?  The devil is always in the details.

The public has little say in the matter, so it’s an uphill battle to negotiate any kind of deal with PG&E and the Brown administration. The Governor also has former PG&E executives on his staff. Ultimately, it comes down to money. What will it cost to encourage PG&E to shut down Diablo Canyon?

At the State Lands Commission the Governor has only one of three votes. The three Commissioners are State Controller Betty Yee (Chair); Finance Director Michael Cohen, and Lt. Governor Gavin Newsom. Watch Newsom’s thoughts on this issue from a previous meeting. He see’s both sides. He’s also running for Governor.

Diablo is at high risk for earthquakes above its design basis. And seismic evaluations ignore material corrosion and cracking and other degradation that may exist at the aging facility.  Not all critical structural parts of the facility are even accessible to inspect let alone feasible to repair or replace. And the thin-walled nuclear waste canisters may already be cracking, but no one knows, since they cannot be inspected.

Will California regulators and elected officials ever learn from past experience?

The California Energy Commission made a presentation in Southern California on June 22, 2016 regarding the increased probability of major earthquakes near California nuclear facilities, so California regulators are fully aware of this, but are just hoping for the best.

Japan’s regulators and the nuclear utility (TEPCO) at Fukushima Daiichi were also confident there would be no problems. The result is an ongoing triple nuclear reactor meltdown that the nuclear industry appears to not have a clue how to stop. Diablo Canyon and the other California nuclear facilities sit on the same earthquake “Ring of Fire” as Fukushima.

What will it take for our regulators and utilities to learn the lessons of Fukushima and the lessons from California’s mismanaged utilities?