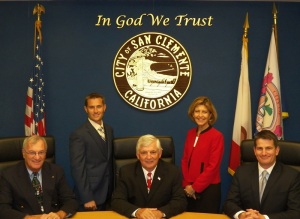 The City intends to encourage SONGS’s [San Onofre Nuclear Generating Station’s] owners, other energy purveyors and regulatory agencies to: 1) identify alternative energy sources to help meet local and regional electricity needs, 2) decommission SONGS in a safe and timely manner, and 3) seek a long-term solution for the relocation and storage of fuel rods away from SONGS to a location distant from urbanized areas…

As addressed in the Safety Element, landslides, seismic, liquefaction, tsunamis, flooding and nuclear events are potential risks in coastal San Clemente. With a railroad running along the coast, rail-related accidents could be an issue and are addressed in the Beaches section of the Beaches, Parks and Recreation Element. In addition, storm generated tidal surges and rising sea-levels present potential hazards that must also be considered. Another hazard is the loss of beach sand and other sedimentary deposits which are critical to the protection of coastal lands and bluffs and for public safety, recreation and wildlife habitat. A major provision of the Coastal Act is to manage coastal hazards, reduce risks to life and property, avoid substantial changes to natural landforms and minimize the need for protective structures…

San Clemente City Council unanimously passes Resolution 13-53 regarding the urgency of removing the dangerous nuclear waste from San Onofre, based on geographic conditions and dense population. The resolution was submitted as a comment to the NRC Waste Confidence Generic Environment Impact Statement (GEIS). The NRC GEIS concludes it is safe to store the tons of nuclear waste at all nuclear plants indefinitely.

The city also sent a letter to the NRC requesting an extension of the deadline for GEIS comments to February 28, 2014 and sent letters to cities within 20 miles, asking them to support the same action.  More…

The San Clemente City Council sponsored several meetings and presentations regarding the implications of Japan’s Fukushima Daiichi Nuclear Disaster for the San Onofre Nuclear Generation Station. This resulted in their conclusion that there are serious safety issues at the San Onofre nuclear plant.  Here are some key documents and presentations from those city council meetings.

1. Direct formal communication, on behalf of the citizens of San Clemente, to the NRC with copies to appropriate elected and appointed officials (including Orange County municipalities and the County of Orange Board of Supervisors with a summary of the action plan, encouraging them to follow San Clemente’s lead and to support the removal of spent nuclear fuel):

a. Support Senator Boxer’s and Feinstein’s efforts to advocate that the NRC modify its relicensing policies in order to assure a full reexamination of design basis elements, including seismic and tsunami hazards, operational issues, plant security, emergency preparedness, and spent nuclear storage options.

b. Insist that the NRC require that utilities move spent fuel rods to dry cask storage as soon as individual rods can safely be moved.

2. Direct formal communication, on behalf of the citizens of San Clemente, to Senators Feinstein and Boxer and Congressmen Calvert and Issa:

b. Ask our Federal Elected Officials to insist that a permanent off-site storage solution for spent fuel be identified before relicensing is granted to SONGS.

c. Ask our Federal Elected Officials to review the risk/benefit analysis that NRC uses to ensure that it adequately assesses public risk levels.

4. Pursue additional funding for the extension of La Pata as an additional evacuation route from San Clemente.