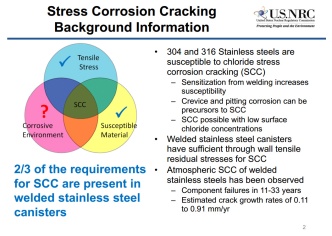 Edison created an artificial date of June 2019 to have all the spent fuel assemblies loaded into canisters. We do not need to rush into another “steam generator” like boondoggle. Edison’s Tom Palmisano told the California Senate Energy, Utilities and Communication Committee on August 12th that issues regarding high burnup fuel and dry cask storage have been addressed. However, these issues have not been resolved.

Canisters may need to be replaced within 30-42 years or sooner.

Recent information provided by the NRC technical staff indicates dry storage canisters may need to be replaced within 30-42 years or sooner, due to stress corrosion cracking of the thin (1/2 to 5/8 inch) stainless steel canisters (due to our coastal environment). Similar stainless steel materials at nuclear plants have failed within 16 to 33 years.  The concrete overpacks also have aging issues that are accelerated in coastal environments.

Southern California Edison has budgeted $400 million dollars for the dry storage system. As Commissioner Florio stated after the recent CPUC meeting in Costa Mesa, “We don’t want to have to buy these again.”

No remediation plan to repair or replace failed canisters.

The NRC stated that if one of the canisters becomes defective (e.g. 75% through-wall stress corrosion cracks), there is no way to repair or replace the canister; especially if the spent fuel storage and transfer pools are demolished, as Edison plans to do. And before a canister can be transported (inside a transport cask), the canister must not have cracks.

No technology to adequately inspect canisters for stress corrosion cracking.

The NRC states technology does not exist to adequately inspect steel canisters for stress corrosion cracks or to measure how or when the cracks will go through the wall of the canister. They plan to allow the nuclear industry 5 years to try to develop technology. And then they only plan to require inspection of one canister at each nuclear plant.

The NRC is in the process of developing an aging management plan due to the new requirement that dry storage systems need to last 100 to 300+ years. They are delaying license renewals until unresolved aging management issues can be addressed. However, they plan to allow the NUHOMS 32PTH2 canister that Edison may procure to be included in an existing license. The NRC is evaluating how long dry storage systems will last. Previously, they only needed to last 20+ years with the assumption there would be a permanent repository.

No canisters approved for high burnup fuel for more than the initial 20 years.

The NRC has not extended licenses past the initial 20 years for storage of high burnup fuel (>45GWd/MTU) due to unknowns about high burnup fuel in storage and transport. This fuel is over twice as radioactive and hotter than lower burnup fuel.  The NRC has allowed nuclear plants to burn fuel longer, without the research to show that it is safe in storage and transport. The protective fuel cladding can become brittle and crack; resulting is higher risk for radiation exposure, if the canisters fail.

The NUHOMS DSC-32PTH2 canisters that Edison wants to procure are not yet licensed by the NRC. If approved, the license will expire in less than nine years (February 5, 2023), since Areva-TN decided to avoid a new license certification and include it in their existing license for the DSC-24PT series, which has a different design.

No NRC canisters are certified for extended storage or for geological repository storage. Canister licenses for the more dangerous and unstable high burnup (>45GWd/MTU) spent fuel have not been renewed for more than the initial 20 year license, even for expired licenses. And the NRC’s Bob Einziger states there are still transportation problems with high burnup fuel.

NRC staff plan to have a draft for public comment regarding dry cask storage relicensing by the end of 2014, according to Mark Lombard, Director, Division of Spent Fuel Storage and Transportation. However, this will not address our current issues.

Darrell Dunn, an NRC materials engineer, stated stainless steel dry storage canisters are vulnerable to failure within about 25 – 42 years. If any of the fuel cladding in the canister fails, there is no protective barrier and we could have a serious radiation release.

The NRC said they have no current mitigation plan for that consequence.  They suggested we MIGHT be able to put the fuel back in the spent fuel pool.  However, Edison plans to destroy the spent fuel and transfer pools. And there is no technology to repair the canisters. The NRC said they HOPE there will be a solution for mitigation in the future. Even an NRC May 2nd High Burnup Fuel letter admits there are mitigation problems.

No Inspections of Stainless Steel Canisters 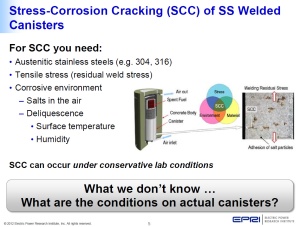 To make matters worse, these stainless steel canisters are not inspected after they are loaded into the unsealed concrete overpacks (Areva NUHOMS) or concrete casks (Holtec and NAC Magnastor).  The NRC proposed having each nuclear plant inspect the outside of only ONE stainless steel canister before they receive a license renewal and then do that once every 5 years.  The industry balked at having to even check one canister at every plant. The problem with the stainless steel canisters is they do not protect against gamma rays; so it’s not a simple task to remove a canister from the concrete overpack/cask to examine the exterior for corrosion or other degradation. And since welded canisters do not have monitoring for helium leaks, we may not have any warning of an impending radiation release. 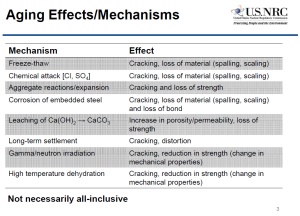 Ductile Cast Iron Casks may be a better solution

Asked if San Onofre would be better off using ductile cast iron casks like the CASTOR, due to our coastal environment, Aladar (Al) Csontos, NRC Branch Chief in the Division of Spent Fuel Storage and Transportation (SFST), said that might be a better option near the ocean. Casks, such as CASTOR, may eventually have aging issues with bolts and seals. The CASTOR has double sealed lids, so even if one fails, we’ll still have a sealed canister. And Edison would be able to easily monitor for cask material degradation with all the casks.

The NRC licensed the CASTOR V/21 ductile cast iron cask years ago and the cask is still in use. In fact, a CASTOR V/21 was used to prove low burnup fuel is safe to store for over 15 years. However, none of the current U.S. cask designs have been tested even though they use a different storage technology.

The U.S. industry chose a different technology (stainless steel/concrete overpack/cask) mainly due to the cost of ductile cast iron at the time and with the assumption that the canisters would only be needed until Yucca Mountain opened.

The CASTOR V/21 was considered the “Cadillac” of the industry and the CASTOR line is still very popular in other parts of the world for BOTH storage and transport (including high burnup fuel).

The CASTOR canisters have multiple certifications for quality manufacturing, unlike the U.S. stainless steel canisters that are allowed exceptions to ASME and other standards. Material prices for stainless and cast iron have changed, so the price point should be lower.

The CASTOR has pressurized lid monitoring to detect helium leaks and temperature changes. The welded U.S. canisters do not have this capability, but the NRC and Department of Energy (DOE) state this is a high priority issue to resolve.

The inside of the CASTOR cask, including the sealing surface, has a nickel coating for corrosion protection. On the outside, the cask is protected by an epoxy resin coating in the fin area and nickel coating elsewhere.  And unlike the U.S. stainless steel canisters, it does not have stress corrosion cracking issues and does not require a concrete overpack/cask.

The original CASTOR V/21 is almost 15″ thick as opposed to the 1/2″ to 5/8″ stainless steel canisters.  The newer model CASTOR V/19 is almost 20″ thick. There are other ductile cast iron canister brands that are used in other countries. However, the U.S. emphasis on cost rather than longer term safety discourages competition from better quality casks vendors. With new U.S. needs for longer term onsite and interim dry cask storage, this should change. 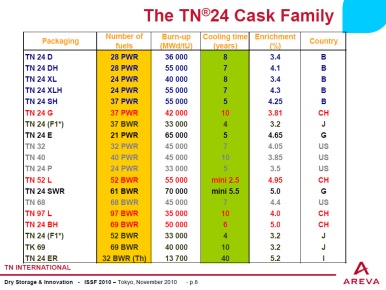 Areva makes thick walled forged steel casks (TN series), which were approved for limited use years ago by the NRC. The TN cask is much thicker than the stainless steel canisters and doesn’t require a cement overpack/cask.  Its specifications are not as robust as the CASTOR, but better than the Areva NUHOMS system that Edison may procure. 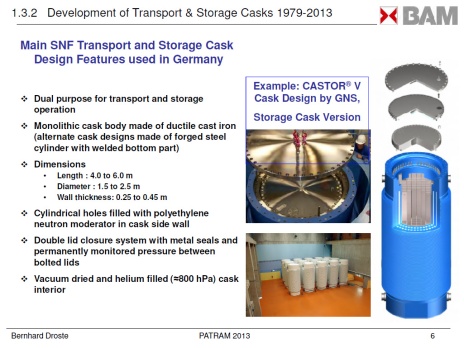 Both Japan and Germany enclose their casks in buildings for protection from the environment and other external forces.

This is something Edison should consider.

No dry cask solution is even close to perfect, but we need to buy ourselves as much time as possible. Given the issues with stress corrosion cracking, concrete degradation, lack of monitoring, and lack of external inspection of stainless steel canisters, we can do better.

Spent fuel pools are dangerous. However, the spent fuel needs to cool in the pools for a number of years, so we have time to do a better job selecting a dry cask storage system. Edison’s artificial deadline of June 2019 to have all canisters loaded should not be the driving factor for the future of California.

The NRC does not proactively research dry storage system designs. They only respond to vendor requests for licensing. Vendors will only do this if they think they have a customer lined up for their product. California needs to be that customer.

Edison should reopen the bidding to include vendors with other cask technology. Edison’s Community Engagement Panel (CEP) had a presentation from Areva, but from no other dry cask storage vendors. Edison only solicited bids from three canister system manufacturers who all have the problems mentioned in this document.

Edison requested the NRC approve the NUHOMS 32PTH2 canister – it was not licensed when they decided to use it. That license amendment (Docket No. 72-1029, Certificate of Compliance No. 1029 Amendment No. 3) may be approved in August.  However, the CPUC should not approve funding for this canister system.

Edison has not shared with us the documents they used to solicit bids (Request for Proposal), so we have no idea what the requirements are in that bid package.  That would be useful information and the public should have access to this information.

If you have questions about sources for any information, contact Donna Gilmore. There are also detailed references on the SanOnofreSafety.org website.  A link to the NRC July and August presentations as well as other documents discussed here are included below.