The Nuclear Regulatory Commission (NRC) chose to EXCLUDE high burnup spent fuel in their 2014 final report on Spent Fuel Transportation Risk Assessment (NUREG-2125).   However, they claim “..that NRC regulations continue to provide adequate protection of public health and safety during the transportation of Spent Nuclear Fuel.” 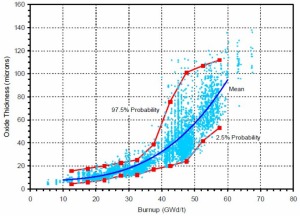 When the NRC Commissioners were briefed on the draft version of the report, they were given the impression the report addressed high burnup spent fuel.  At a July 11, 2013 NRC briefing, Chairman Macfarlane asked if high burnup spent fuel was addressed in the report. She and the other NRC Commissioners were told  “yes”, even though it is not. This exchange between Macfarlane and Michael Ryan is the only mention of high burnup fuel in the transcript. Page 43 of the transcript of the Commissioners’ meeting with the NRC Advisory Committee on Reactor Safeguards (ACRS), July 11, 2013:

CHAIRMAN MACFARLANE: Okay, good. And did the study address – did it look at transporting and the risks of transporting high burn-up fuel which after long term storage may become embrittled?

MICHAEL RYAN: Yes. It was a wide range of fuels, fuel types, fuel burn-ups that were evaluated.

CHAIRMAN MACFARLANE: And the potential for embrittlement of those —

MICHAEL RYAN: All of that, yes.

CHAIRMAN MACFARLANE: Okay, good. All right. That’s what I  was interested in.

At the time the analyses for this report were completed, the maximum burnup for the spent fuel transported in any of the casks was 45 gigawatt days per metric ton uranium (GWD/MTU). Current reactor operations result in spent fuel with burnup levels higher than this. A detailed examination of the effect of the higher burnup levels is outside the scope of this document, but this section provides some general insights on expected changes resulting from transporting these higher burnup spent fuels.”

The regulatory external dose rates must still be met, so there is no effect on incident-free transport or on the results from accidents that do not result in cask damage. The higher burnup fuel will have to be cooled longer before it is transported to meet the cask’s decay heat and dose rate limits and the expected radiation emanating from the fuel should not change substantially (it cannot increase above the regulatory surface dose rates, and the casks studied here are either at that limit or very near to it). Therefore, results from loss of shielding accidents will not change significantly. In all of the accidents that are severe enough to have a release path from the cask, the acceleration level is high enough to fail the cladding of all of the fuel, whether it is high burnup or not. Higher burnup fuel has a rim layer with a higher concentration of radionuclides. This will lead to the rod-to-cask release fraction being higher but will not affect the cask-to-environment release fraction (Table 5-10 gives the release fractions used in this study.). In addition, the isotopic mixture of the higher burnup fuel cooled for a longer period of time will have more transuranic isotopes and less fission product. For example, the inventory of 241Am (Americium-241) goes up from 193 Tetrabecquerels (TBq) at 45 GWD burnup to 1,980 TBq at 60 GWD burnup (5,210 curies (Ci) to 53,400 Ci) and the inventory of 90Sr (strontium-90) drops from 40,400 TBq to 30,600 TBq (1,090,000 Ci to 826,000 Ci). Insufficient data exists to accurately estimate the rod-to-cask release fractions for higher burnup fuel. If the release fractions remain the same, the effect of the change in radionuclide inventory increases the number of A2s released by a factor of 5.9. This increase does not alter the conclusions of this study.

The NRC findings on transporting nuclear spent fuel contains many assumptions, resulting in unsubstantiated conclusions. Here are their findings and conclusions.

The following findings are reached from this study:

The NRC should be required to complete a revised report considering the implications of high burnup fuel transport. 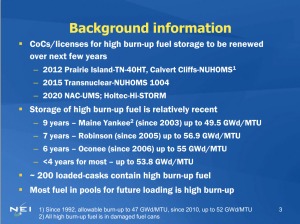 High burnup storage and transport problems need to be solved as soon as possible. However, they do not appear to be receiving the priority needed from the NRC, DOE or nuclear industry. And industry profits are currently a factor when developing solutions. The public at risk for dangerous radiation releases from high burnup fuel.  And with no technology to monitor inside dry casks, we won’t know there is a problem until it’s too late.  The NRC is not meeting it’s mission of “protecting people and the environment.”