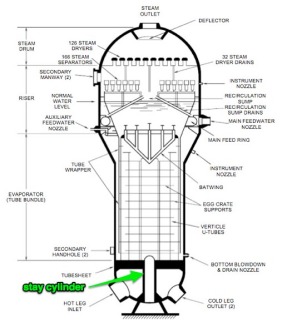 Plugging tubes and operating at lower power (as Southern California Edison suggests) are not viable solutions:

One of San Onofre’s Unit 3 steam generators leaked radiation into the air after being installed less than a year. The other three replacement steam generators are showing unprecedented premature wear. San Onofre has been shut down since January 31, 2012.

No blackouts have occurred from the shutdown and California’s electricity grid operator stated it is unlikely there will be blackouts during peak summer months. California’s other nuclear power plant, Diablo Canyon, was also shut down recently.  California experienced no blackouts with both nuclear plants shut down.